Spring Break is here again, and that means teens and college students are heading to the beach in droves—and often to foreign countries. 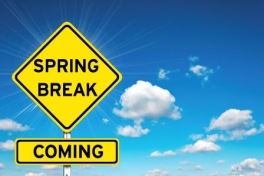 But first, a little reality check.

While your planning your big getaway, keep the following tips in mind to make the most of your experience, and know when to play it safe.

Drinking presents the biggest dangers on Spring Break, both to legal and underage drinkers.

Even sober driving on Spring Break isn't without its risks.

Hotels—especially those abroad—still present opportunities for thieves and other nasty surprises.

Don't let your guard down in the water or on the beach—swimming is generally safe, but you have to use your head.

No country is identical to the US, so never make any assumptions on vacation.

These guidelines aren't meant to scare you or convince you to stay home. But we're all prone to being a little naive, especially when going on vacation. The fact is, things can go wrong and are sometimes beyond our control.

Being prepared for the worst isn't paranoia—it's common sense.

So go have fun, but remember not to sacrifice your safety for a few days of excitement. It's not worth it in the long run.