Rollovers are exactly what the name implies—a collision that causes one or all of the involved vehicles to roll violently.

And rollovers can happen without warning. The rapid nature of car accidents means thousands of tiny factors can go wrong, causing your vehicle to flip over. With that being said, there are a few risk factors for rollover crashes.

First of all, know that any car has the potential to roll over. However, tall and narrow vehicles have a much higher risk because of their high center of gravity. Vans, trucks and SUVs are particularly in danger. 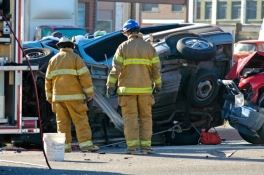 Moving beyond the vehicles involved, dangerous roadway conditions also contribute to rollovers. Automobiles are in danger of tipping and rolling when a driver is forced to swerve suddenly, such as to avoid debris or animals on the highway.

But wet or icy roads can have the same effect—when your car quickly veers to one side, its momentum is still moving forward, which causes your vehicle to roll.

Rollover crashes are usually due to a combination of risk factors, with the main culprit being drivers. The National Highway Traffic Safety Administration says that at least 90% of rollovers involving one car were triggered during routine driving behavior.

What that means is, those drivers must have been engaging in another activity to put themselves at risk—such as texting, drinking or speeding.

Even brief distractions on the road can cause us to swerve suddenly and catastrophically.

Rollovers happen frequently enough that they affect all of us. Just a few months ago, a tour bus just outside DC rolled over, killing one passenger and injuring more than a dozen others.

The best prevention for a rollover crash is vigilance. Putting away the phone and paying attention to the road give you the time to react to roadway dangers. #carrolloeraccident #carrollover