Drowsy driving happens whenever you're not fully rested and you get behind the wheel. Whether you're slightly tired or close to nodding off, the effects of driving while sleep-deprived can be disastrous.

The US National Highway Traffic Safety Administration (NHTSA) found that drowsy driving was responsible for roughly 1,500 deaths every year, and over 100,000 total crashes. 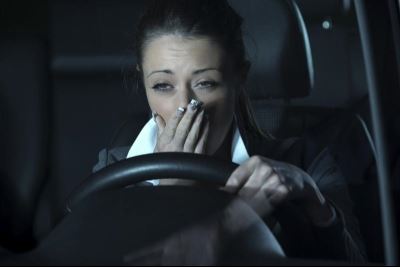 Staying up too late or waking up early are common causes of drowsy driving, but the situation can also occur because of sleep disorders, shift work, alcohol or medications affecting your sleep cycle.

The biggest danger of drowsy driving is that we can't fully control exactly when we fall asleep—even while focusing on the road. It's scary to think, but roughly 4% of drivers report falling asleep at the wheel.

But besides dozing off, driving without sleep poses other dangers, such as:

In addition, several factors contribute to an increased rate of drowsy driving accidents, including:

If you fall into one of the above groups, be sure to look out for the warning signs of drowsiness to avoid making a fatal mistake behind the wheel. Symptoms to be wary of:

Of course, it's easy to pick up on the early warning signs. But how do we avoid the problem altogether?

Obviously, the best course of action is to get more sleep. While this can be a medical issue for some people, for many others we just don't hit the hay early enough. And if you're already on the road and you feel yourself drifting off, pull over and take a nap.

Regarding caffeine, it can be used as a band-aid for very short drives. However, caffeine doesn't treat the underlying cause of drowsiness, which is not getting enough sleep. Relying on stimulants to get you through a long drive isn't the safe way to go.

Excessive sleep deprivation can affect driving as badly as drinking—sometimes worse. Learn to recognize the symptoms of drowsiness, and make enough time for sleep.

When in doubt, take a nap.