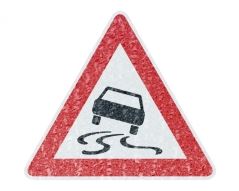 Black ice is often a hidden danger on winter roads, where it lurks unseen and causes difficult driving conditions for the unprepared. The ice is especially hazardous
in the black ice occurs when light rain falls on pavement that is already below freezing, which causes the rain to freeze in a thin, clear coat. The ice is very hard to detect, especially at driving speeds, which is why it's so dangerous.

Every year, hundreds of people in the US die from accidents caused by black ice. During the 2009-2010 winter season, 10 motorists died in Virginia alone because of black ice.

Black ice is particularly prevalent on bridges, since cold air can flow both above and below the road, dropping the surface temperature much faster.

Avoiding black ice can be difficult, but it's important to be extra mindful on sharp turns and bridges, especially when conditions are ripe for black ice formation. Black ice is also more common before and after sunset—and more difficult to detect—so either limit driving during these hours or stick to more well-traveled roadways.