We've all been there—stuck behind someone hesitantly plodding along the sidewalk, head buried in their phone. 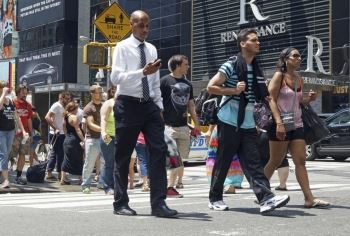 We've seen people completely spaced out in line at the grocery store, completely oblivious because their attention is focused on a phone or tablet.

It's annoying, sure. But does our constant absorption in technology pose a danger to ourselves—or people unfortunate enough to cross our path?

That's what researcher Earnest Conrad decided to find out after being annoyed by countless “petextrians” throughout his day.

Conrad discovered that people who text while walking didn't experience higher rates of tripping or stumbling than usal. That's because we tend to take careful, timid steps when our focus is elsewhere (such as a phone).

However, Conrad's experiment only took into account tripping and otherwise non-hazardous behavior on a closed obstacle course, not your typical busy crosswalks.

As a matter of fact, thousands of pedestrians are injured every year due to being absorbed in their phones (according to https://www.osu.edu/).

If you wonder how it's possible just to walk off a bridge by accident, consider why most car accidents happen:

“I didn't see the other driver. I just wasn't paying good enough attention.”

The problem with studies claiming that humans have adapted to using cell phones while walking is that laboratory obstacle courses don't mimic the unexpected dangers of roads and sidewalks.

Simply put, texting pedestrians take longer to cross roads, are more likely to ignore traffic lights and are less likely to look both ways before entering the street.

“Look both ways before crossing” is advice every parent gives to their children, yet we seem to forget that golden rule when it comes to our phones.

Be Safe from your friends at Kalfus & Nachman.....