Propane is very dangerous and when it is mishandled can cause serious harm. Contrary to everyone’s belief Propane tanks does not explode. According to Propane 101 “The tanks do not implode 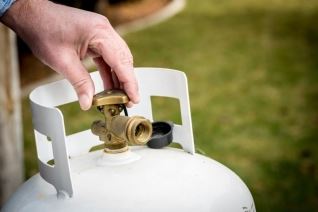 and nor do they rupture or come apart on their own. In fact, bringing a propane tank to the point of "explosion" is a tremendously challenging and time-consuming task that's not as simple as most people think.” This obviously contradicts what most people think, who handle tanks for their gas grills, patio heaters, etc.

There are many safety devices and mechanisms in place to prevent explosions, accidents and propane tank ruptures that government agencies have worked tirelessly to ensure public safety.

However, errors occur and yesterday at 3:28 pm was airlifted to the hospital after a propane explosion in Pulaski County.

Firefighters responded to an alarm at 4500 block of Mallard Point Way, said Newbern Volunteer Fire Chief Brandon Hamblin.Hamblin said the incident involved propane, and a propane company was on the scene. However, the cause of the fire is under investigation.