Data from the National Highway Traffic Safety Administration says that roughly 36 people die in car accidents every year across the US. However, those numbers increase dramatically at certain times of the year. 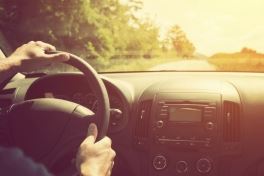 The other big drinking holiday is Thanksgiving weekend, which is one of the busiest bar nights of the year and a prime target for drunk driving accidents.

But the summer holiday is the most dangerous of all, mainly due to the increase of drunk driving—car-related deaths in the summer add up to twice the rest of the year combined.

The peak of these 100 Deadly Days of Driving falls on 4th of July weekend, where automotive deaths soar to 144 per day. The other big drinking holiday is Thanksgiving weekend, which is one of the busiest bar nights of the year and a prime target for drunk driving accidents.

The key takeaway here is that crashes are far more likely when there are more drivers on the road, and when those drivers have been drinking. That's why summer is the most dangerous season, while major travel and drinking holidays are the most dangerous days—Independence Day, Labor Day, Memorial Day, St. Patrick's Day, Easter, Thanksgiving, Christmas and New Year's.

As far as time, the AAA Foundation for Traffic Safety states that the time of day with the most intoxicated drivers out and about is from midnight to 3 am.

However, pedestrians are more likely to be hurt or killed between 3 and 7 pm, overlapping the evening rush hour.

Car accidents can happen in an instant, and can totally catch you off guard. While it's impossible to avoid every bad or drunk driver on the road, at least you can do your part to avoid getting hurt—not driving while intoxicated, staying off the road late at night, and being extra vigilant on major holidays.