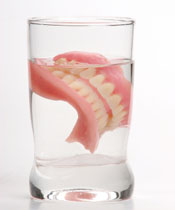 Denture Creams May Cause Neurologic Damage

GlaxoSmithKline (GSK), the makers of Super Poligrip, acknowledged in a consumer advisory that long-term, excessive use of their zinc-containing products may result in health risks including neurological symptoms and blood problems such as anemia. According to a recently-published study, the use of denture creams may be linked with neuropathy, a condition in which nerves become damaged.

Are you a longtime user of dental adhesives who recently noticed a lack of energy, numbness in your extremities, nausea, and a tendency to get sick more often than you used to? These may be the symptoms of a potentially debilitating condition known as zinc poisoning, or Hyperzincuria. Hyperzincuria is an excess of zinc in the blood that can be caused by the use of denture creamscontaining zinc. It can lead to anemia and neurological deficiencies that can eventually develop into a lack of sensation and control in your limbs.

Zinc poisoning is very rare. The majority of our zinc intake comes from food and generally ranges from 5 to 16 mg per day, with 11 mg recommended for men and 8 mg for women daily. In the past, only people who worked with zinc or drank contaminated water suffered from zinc poisoning. However, the use of denture creams represents a dangerous increase in the amount of zinc a person may ingest on a daily basis.

According to chemical analysis, every gram (about the weight of a paper clip) of Fixodent and Poli-Grip denture creams contains 17 to 34 mg, or more than double the amount of zinc a person may consume from all other sources. With the dental adhesive being used in the mouth, some is ingested directly, and zinc may be absorbed through the gums as well, leading to a dangerous excess of zinc in the body. Since the National Academy of Sciences stated in 2001 that the largest daily tolerable zinc intake is 40 mg, so a person who accidentally consumes even a gram of denture cream on a daily basis is likely taking in a toxic dose of zinc, making denture cream a potentially very dangerous product.

Because of the rarity of zinc poisoning, the cause often remains elusive, but in the August 26, 2008 issue of the Journal Neurology, researchers from the University of Texas Southwestern Medical Center identified four patients with neurological deficiencies as a result of Hyperzincuria and correlated their symptoms with the use of denture creams. After conducting an analysis of their denture creams and discovering the high levels of zinc, they took the patients off the denture cream and discovered that zinc levels dropped for three out of four of the patients. However, treatment only led to an improvement of symptoms in two of the four patients.

The main danger associated with high zinc levels is resulting low levels of copper in the bloodstream. This results in degeneration of the nervous system, with effects similar to multiple sclerosis and other demyelinating disorders, including:

Other effects of reduced copper concentrations include:

A successful product liability lawsuit can bring compensation for the following damages:

To learn whether you may be able to get compensation for your injuries, please schedule a free consultation with the product liability attorneys at Kalfus & Nachman, today. Our Norfolk defective product lawyers stand ready to hold manufacturers of dental creams accountable for their negligence and your injuries. We proudly serve the Hampton, Newport News, Norfolk, Portsmouth, Roanoke, and Virginia Beach, VA area.