For those who don't have to deal with lengthy commutes to and from work, road rage might seem like a silly topic—fun to laugh at on late-night comedy sketches and in movies, but not something that affects the average person. 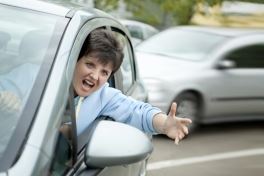 But anyone who regularly spends hours every day sitting in gridlock knows all too well that road rage is a very real phenomenon.

In fact, the National Highway Traffic Safety Administration (NHTSA) says that almost a third of all car accidents are associated with road rage.

When we talk about road rage, the symptoms can vary. Aggressive weaving, cutting off other drivers, speeding, braking suddenly, and various other behaviors are all signs of road rage. But one of the biggest underlying causes of road rage is misinterpreting the behavior of other drivers in a negative way.

The typical aggressive driver has been stuck in traffic far too long. He or she begins to see other drivers as actively working against their efforts to get to work; almost as if all the other cars are in a conspiracy to make the aggressive driver late.

This creates a mentality where the aggressive driver justifies his actions as “getting even” with the other drivers, whether by cutting them off or screaming at them.

While it might seem easy to just ignore aggressive drivers and let road rage fizzle out on its own, the problem is that road rage causes numerous injuries and deaths when left unchecked.

Most troubling is an insight from a recent AAA survey, where victims of aggressive driving admitted to engaging in road rage behaviors themselves as a response;about half of all victims, in fact.

This creates an endless cycle where traffic jams can devolve into senseless violence; nearly 40% of fatalities due to road rage are actually caused by firearms.

If you find yourself stuck in a confrontation with an aggressive driver—or if you're prone to frustration during traffic yourself—the most important thing to remember is remain calm. Acting or responding in an aggressive way does nothing to speed up your commute, and only makes the road more dangerous for everyone else.

For more information on road rage, check out the NHTSA's and AAA's resources on aggressive driving.