It's incredibly easy to feel frustrated with road crews. Roadwork and highway construction slows or blocks traffic in the most crucial routes, often during peak driving times.

We've all been there before—rolling our eyes, stuck in gridlock as workers go about laying asphalt, digging holes and erecting new barricades. And especially in the DC metro area, it seems like not a day goes by when some road or another isn't being ripped up and replaced.

But don't take it personally.

National Work Zone Awareness Week (NWZAW) is a yearly attempt to shed light on the dangers associated both with working on highways but also driving near those work zones. 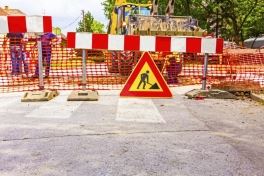 Listen, road crews don't wake up each morning thinking of new ways to make your commute miserable. Anger and frustration lead to reckless and aggressive driving, and ultimately traffic fatalities.

On the other end of the spectrum, driver distraction due to slowed or stopped traffic near roadwork can also lead to injuries. It's vitally important to stay alert and watch out for workers, heavy equipment and other motorists—even when traffic is moving at a crawl.

The Department of Transportation's theme this year is to end distracted driving near roadwork. That means being fully aware on a cognitive (keeping your mind focused), visual (keeping your eyes on the road), and manual (keeping your hands on the wheel) level.

Roadwork-related accidents are on the rise again after a brief lull at the beginning of the decade, meaning more and more drivers simply aren't paying attention or are driving recklessly near road crews.

With the number of drivers in the US steadily increasing—and the need for new and improved roads along with it—there will be even more opportunities for collisions on congested roadways.

Help do your part, and remember to take extra care when you see the orange cones and flashing lights. Someone's life might be depending on it.